HUNTERSVILLE, N.C. — A second massage therapist from a Huntersville spa has been charged with inappropriately touching a woman who was getting a massage.

Channel 9 has talked to two women who accused the first massage therapist. The charges against him were dropped on a technicality, and now there is a criminal summons issued for another massage therapist from a case in April.

Anchor Allison Latos asked what’s being done to protect massage clients at the Hand and Stone Massage and Facial Spa on Gilead Road.

A 58-year-old woman told Huntersville police she went to the Hand and Stone spa on April 9 for a massage, but the male therapist's touching crossed the line.

She is now pressing charges.

“You make yourself very vulnerable and a lot of times, when you go into these massage places, you're dealing with strangers,” resident Lauryn Smedley said after hearing about the latest allegations. 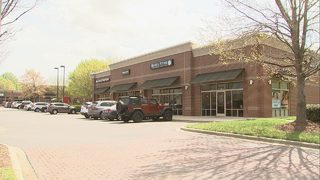 The North Carolina Board of Massage and Bodywork Therapy lists the Mooresville massage therapist's license as active until December.

An employee told Latos Wednesday morning over the phone that Delsignore is no longer employed at the spa.

A spokesperson for the spa said, in part, "Mr. Delsignore was removed from the schedule, asked to vacate the premises and subsequently terminated. The franchisee proactively reached out to the state Massage Board and has been cooperating with the Huntersville Police Department."

Another massage therapist at the spa, Daniel Bonhom, was also accused of inappropriately touching clients. His criminal charges have been dropped.

“I'm comfortable,” Linn Kaampaoueng said. “I don’t think they do that. They give good massage(s) in there.”

The Board of Massage and Bodywork Therapy said it has to receive a formal complaint from the client to launch an investigation.

Delsignore has not been served with that criminal summons yet.

Two women, who claimed they were sexually assaulted, are suing the owners of the spa because they believe the business didn't thoroughly check Bonhom’s background in the previous case.

[PAST COVERAGE: Women sue spa after allegations of sexual assault]

He was accused of inappropriately touching two women while employed at Massage Envy before the two women say he violated them at Hand and Stone.

All four criminal charges against Bonhom were dismissed on a technicality because of the statute of limitations.