'He was a fighter in the beginning': Vigil held for 3-month-old killed when tree fell on home

The parents have launched a GoFundMe in hopes to lay their son to rest and find a new place to call home. 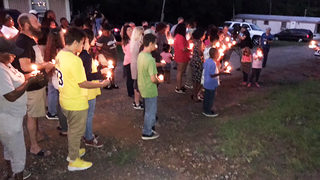 Police said the tree landed on the home on Moses Court near Dallas around 12:45 p.m. Sunday.

The child, identified by his family as Kade Gill, was taken to the hospital where he was pronounced dead.

“The pictures you could see, he was happy. You could look at his eyes and tell. I do believe he was a happy baby,” the baby’s cousin Ann Brown said at the vigil.

Family just sent me this picture of Kade. His mom described him as a fighter. He was born five weeks early and spent 10 days in NICU, she says. @wsoctv pic.twitter.com/ZmPndIvS65

The family was home in the living room when the tree landed on the home, family members said.

"He was unresponsive," father Olen Gill said. "As I approached the room, I see them pumping on his chest, and that time, I knew that it wasn't good."

Olen Gill said his wife Tammy Gill was holding Kade on the couch when they were struck by the tree.

"The tree had divided us," Olen Gill said. "I'm in the kitchen and she's in the living room on the couch."

"He was a fighter in the beginning. He came five weeks early, survived the NICU 10 days," Tammy Gill said.

Kade lived a short life, but had a powerful impact. Neighbors are grieving his death.

"I'm fighting not to cry, but you can't help but to cry sometimes thinking about him," said neighbor Alexis Hawkins.

Tammy Gill said they were keeping a close eye on the conditions and their surroundings during the storm.

"We was watching the trees in the back that's leaning, but I guess the whole time we were watching the wrong one."

Officials said the home is totaled and Kade's parents are staying with family.

"It's a heartbreaking reminder every time you look over there," said Hawkins.

"They come in the room and said he had head trauma and we didn't even know," Tammy Gill said. "They had been doing CPR for the last 30 minutes and they just wanted permission to stop. I said no at first, but after another 30 minutes, he wouldn't come back."

A volunteer with the American Red Cross told Channel 9 that a case worker has been assigned to help the family.