UNION COUNTY, N.C. — Troopers said a woman pulled out into the path of a tractor-trailer in Union County Monday afternoon, leading to a crash that killed her and three family members.

Chopper 9 Skyzoom flew over the scene along Lancaster Highway at Nesbit Road just after 3 p.m.

The driver, 68-year-old Dale Kennedy, and her three passengers, June Allen, 68, Michael Allen, 27 and Jesse Winters, 36, all died. Troopers said the family was from New Hampshire.

The driver of the tractor-trailer wasn't hurt. 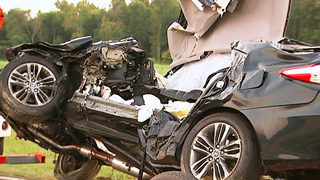 Neighbors told Channel 9 that part of Lancaster Highway is very busy and that the crash proves there needs to be a 4-way stop.

Channel 9 dug through thousands of pages of crash data on that half-mile stretch of Lancaster Highway and found that the Department of Transportation gave that section of road a danger score of nearly 90 out of 100, with 100 being the most dangerous.

While that is high, it's not the most dangerous part of the road. Several other stretches ranked 100 out of 100.

Channel 9 also found that from 2012 to 2016, there were nine crashes near Lancaster Highway and Nesbit Road. None of them were fatal, though people were injured in four of the wrecks.

One person killed in shooting in Cornelius, police say