CHARLOTTE, N.C. — Charlotte-Mecklenburg police announced Thursday morning an arrest has been made in connection with a 2008 quadruple homicide.

Dominick Daise, 32, was booked overnight into the Mecklenburg County Jail and the homicide cold case unit charged him with four counts of murder.

CMPD Maj. Cam Selvey said Daise has been charged in connection with the cold case killings of Timothy Stone, Cherilyn Crawford, William Royster and Andrew Babyak that stunned the city in March 2008.

"This was a horrific crime and something that really shook our community," Selvey said. 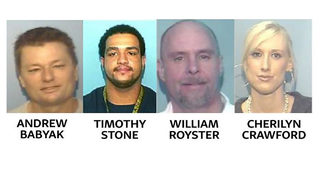 The four were found dead inside a top floor unit at the Tree Top Apartments on High Meadow Lane in southwest Charlotte during Easter weekend in 2008.

Three of the victims were found in a bedroom and the fourth was in a bathroom.

Selvey said that although it was a good feeling to finally make an arrest in the case, police were confident that Daise did not act alone and they are still looking for others involved in the crime.

Selvey told Channel 9 that Daise's arrest wouldn't have been made without the dedication of numerous homicide detectives as well as the volunteers who review cold cases.

No motive was released Thursday.

Cherilyn Crawford's mother, Lu Prudhomme, attended Thursday's briefing. She spoke to the media, saying the families of those who lost loved ones had been waiting more than a decade for this news.

"Today is a day we are grateful for and that we've waited 11 years for," she said. "It was devastating to our family... it doesn't go away. It's going to be a life-long journey living without Cherilyn and I just want to thank everyone today."

CMPD’s homicide cold case unit has been in existence since 2003.

“They take info in boxes and read -- and sift -- and find minute details that may or may not lead to something," Selvey said. "The cases they look at lead us to different paths."

The unit has reviewed 179 homicides dating as far back as 1979. The unit has cleared 49 cases.

Check back with wsoctv.com for updates on this story.