CHARLOTTE, N.C. — The Charlotte-Mecklenburg Police Department is recognizing two officers who went out of their way to help a single mother who they said needed a helping hand.

Officer Will Reinke said he responded to a call at the woman’s home on Feb. 5 when someone slashed her tire and kicked in her door.

She still had a spare tire on her car weeks later, so Reinke said he asked if he could take the spare in for fingerprints.

Instead, Reinke took the tire to an auto shop and got a new rim for her. He also asked Officer Adam Planty to help bring the new tire to surprise her. 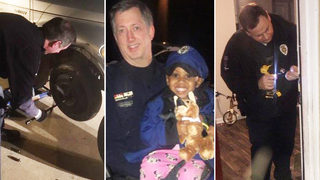