GASTON COUNTY, N.C. — A brutal locker room fight captured on camera in Gaston County is leading to a fight in the courtroom.

The video, which may be difficult for some viewers to watch, was recorded inside Stuart Cramer High School's locker room on Oct. 16, 2018, after a welding class.

Attorneys Will Devore and Alex Heroy represent the victim and his family.

They said the student, who was previously diagnosed with a disability, still suffers trauma from the fight.

The attorneys argue a teacher knew of the threat.

“Not only did they know about it, they chose to do nothing,” Devore said.

"You have an altercation in class, and you do nothing about it,” Heroy said. "Just let these kids go into an unsupervised locker room after the fact, you know something is going to happen, that's negligent."

On Tuesday, the attorneys plan to sue the Gaston County Board of Education and the teacher claiming the fight could have been stopped before it started.

The victim has not been back to Stuart Cramer since that locker room fight. 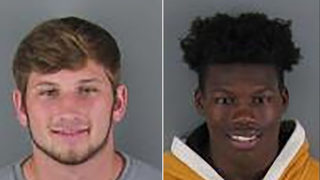 Lindsey will be in court in December on misdemeanor assault charges.

There were no hearings scheduled for Kayton.