The Flint Hill Fire Department and Charlotte Fire Department responded to the fire in the south parking lot of the park. Officials said 11 cars were damaged and most of them were likely totaled.

Bethany Spears was at the amusement park with a group of campers, and she said that she knew it was bad when she saw thick, black smoke.

“We were trying to get all of our kids rounded up to make sure we got them back to Hickory,” Spears said.

Chopper 9 Skyzoom flew over the scene and saw the significant damage to the vehicles. 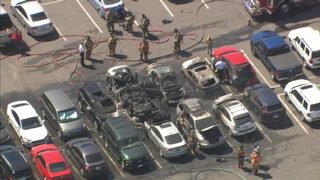 Fire officials said the strong breeze spread the flames quickly. They were able to put out the fire in about 30 minutes.

"One second one of the cars was on fire, then it got really dark so we knew it spread to other parts," Spears said.

Officials said no one was hurt. Carowinds said its guest services associates are helping anyone who was impacted by the fire.

Fire officials are investigating a cause.

Check back for updates on this developing story.