The charges come following an investigation after an ex-girlfriend claimed he had stalked her. 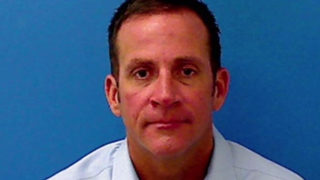 The charges come after a months-long investigation by the North Carolina State Bureau of Investigations into the allegations after the woman claimed Reid installed a tracking device on her vehicle.

Sources told Channel 9 that the tracking device came from the narcotics division which Reid supervised.

We first updated WSOCTV news app users with a notification just after before 10 a.m. Thursday that the son of the current sheriff had been indicted.

Download the WSOCTV news app for your smartphone and get updates on this developing story as they come in.

Reid didn’t answer any of Channel 9’s questions as he walked into the Lincoln County Courthouse on Friday.

The judge told Reid if he is convicted of all five indictments he could face more than eight years in prison.

Reid is the son of current Catawba County Sheriff Coy Reid and unsuccessfully ran for the job himself this spring.

Despite the allegations, Reid said during his campaign that he would stay in the race, calling the accusations a political ploy.

[Catawba sheriff candidate says investigation of him is 'dirty politics']

"This entire situation is a political attack," Reid said before the election.

Investigators said the stalking allegations involved Reid allegedly placing a tracking device on his ex-girlfriend's car and then sending her several text messages of places she had traveled.

Reid spoke to Channel 9 about ending the relationship with the woman and how she was the one who was accessing his bank account and driving up and down the road in front of his house after becoming upset about the breakup.

At one point, Reid said the woman visited him at work and waited in an area where the narcotics tracking devises were openly kept.

Last month, a judge unsealed a search warrant used by the SBI at the Catawba County Sheriff’s office in April.

The warrant was heavily redacted, but said agents were looking for evidence of stalking, cyber-stalking, and of Reid "willfully failing to discharge the duties of his office."

It also referenced text messages from Reid to his ex's new boyfriend that detail locations of where he had been and a picture taken of his car while the couple ate at a restaurant.

Reid is scheduled to be back in court July 23.