'God put me on that road for a reason': Nurse helps save trooper shot in face

WILSON, N.C. — Officials said a trooper in Wilson County was shot and left for dead Monday night and a nurse driving by at the time is being credited for helping save his life.

Police said the shooting happened around 5:15 p.m. on N.C. Highway 42, about 8 miles northeast of Wilson, N.C.

Sherice Richardson said she was headed to Rocky Mount to pick up her toddler.

"I left the house at about 5:15 and I go on some country roads," Richardson said. "I was going around the curve, passing blue lights and so I slowed down some more, then I got out of the car that's when I seen the bullet holes in the windshield. I didn't know it at the time but when I got to the car, he just had blood coming from his face and I was like 'Oh my God, are you OK?' and all I could hear him say was 'I'm hit, I'm hit.' I was like we need to give him help so I called 911."

Luckily, Richardson is a registered nurse.

"He had gauze in his car so I instructed another bystander to put pressure on his face while I was on the phone with EMS," she said. "He was able to hold it himself actually and I sat there and comforted him."

She said she waited with Harrell until EMS arrived. 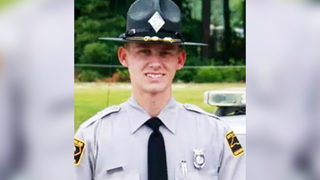 "It was weird," she said. "You're sitting here with someone that is supposed to protect you and he's down but you've got to do something. I'm just thankful. I had him in my prayers. I'm just grateful he made it out so fast."

"God put me on that road for a reason at that time," said Richardson.

Harrell was released from the hospital on Wednesday.

Law enforcement agencies said they have three suspects in custody.