GASTON COUNTY, N.C. — Several people involved in what authorities are calling a possible human trafficking case faced a judge for the first time Wednesday morning after their SUV was pulled over and drugs were found a day earlier on Interstate 85 in Gaston County.

"We know it passes through here every day,” Cleveland County Sheriff Alan Norman said. “It's just a matter of being at the right place at the right time."

Troopers said they stopped 37-year-old Edgar Ortiz-Jarquin, who was driving a gray Toyota Sequoia with Arizona tags, around 3:30 p.m. on I-85 near York Road and got consent to search the SUV.

Troopers said they were looking for drugs when they pulled the vehicle over.

Ortiz-Jarquin and another man ran from the SUV but were taken into custody a short time later.

Inside the vehicle, investigators said they found 900 grams of meth and 500 grams of marijuana. Also in the SUV were six other men and a woman -- ages 16 to 30 -- and officials think some of them may be human trafficking victims.

The 6 victims were men and women — they appeared to be okay. We don’t know whether the human trafficking was connected to labor, sex or something else. The license plates were out of Arizona. @wsoctv https://t.co/ehiyU5FyCW

"I was just driving by and there (were) about eight cops out there,” witness and motorist Curtis Johnson said. “(There were) about six Hispanic males and females sitting out."

[ALSO READ: Man who forced girls to have sex for money to pay his bond sentenced]

Trooper Ray Pierce said it's unusual to discover a human trafficking operation on a highway.

"We don't have this," Pierce said. "We're not specifically out here looking for it, so this is a rare occurrence that we stumble upon it."

It's unclear where Ortiz-Jarquin came from or where he was heading, but troopers said he was driving a car with Arizona plates. 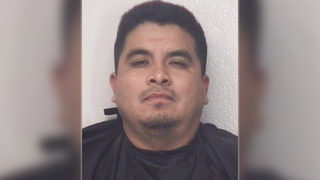 Ortiz-Jarquin was charged with three different drug charges as well as resisting arrest.

He is being held at the Cleveland County Jail without bond.

On Wednesday, the eight people in the SUV faced a judge for the first time, all of them facing drug charges.

Channel 9's Ken Lemon was the only reporter in the courtroom. He said a few of those detained looked confused as they made their first appearance.

Jose Sabochol, 16, was the youngest in the group and one of the few to speak up in court.

"This matter will not be handled in this court," the judge said.

Another suspect, Alfredo Bolandos-Flores, told the judge through a translator, "I'm not a part of this crime."

He told the judge it was not his fault.

"The government would retain them and actually take them into federal custody," Sheriff Norman said.

Agents from Homeland Security interviewed the occupants in the vehicle to get a better understanding of what happened. Some inside the SUV indicated to police they had been taken against their will.

Each individual was placed in jail under a $1 million bond.

The Highway Patrol is still investigating and the district attorney told Channel 9 that the Department of Homeland Security is also involved.

Anyone with information about the case is asked to call 800-572-8765 immediately.