CHARLOTTE, N.C. — The Charlotte-Mecklenburg police officer who shot at a car that attempted to run him over will meet with internal affairs this week to provide his statement about what happened in the middle of a busy Charlotte Douglas airport parking deck.

The meeting is standard practice. Any officer involved in a use-of-force case has to come down and give a statement and tell his side of the story.

The driver of the car, 20-year-old Xyavier Calliste, is still recovering in the hospital.

Lor will be accompanied by his attorney, Michael Greene.

CMPD is in the middle of determining what happened and whether all of its policies and procedures were followed.

The information the department released about the incident is that two officers went to investigate a potential car break-in suspect.

When they approached the Calliste’s car,  he drove toward the officers and Lor fired several shots, striking Calliste at least twice.

Calliste is expected to recover and will be charged with assault with a deadly weapon on a law enforcement officer.

Defense attorney Norman Butler has represented several officers who were under the department's microscope.

"Certainly you would expect the police department to examine all of the evidence," Butler said.

Investigators will speak with Lor and review video from the parking deck.

"Instead of depending on a person's verbal recollections, you can evaluate it objectively because you can see it," Butler said.

Overnight, we found the radio conversation between police on scene and dispatchers. Listen to this—>
We’ll have more ahead at 6:30AM. @wsoctv pic.twitter.com/DzD53cEPBU

Lor, 37, responded to a suspicious vehicle call in a parking deck on Harlee Avenue at the airport.

Police said an airport employee drove into the parking deck and noticed a car following him.

ICYMI: Police say an officer fired shots in the business valet parking deck at @CLTAirport last night after an employee alerted police to a suspicious vehicle. The officer told investigators he fired shots because he though the suspect was going to run him over. @wsoctv pic.twitter.com/i05UCtTJPm

BREAKING: A CMPD officer fired shots after a driver nearly ran him over, a source tells @AllisonWSOC9. Officers were responding to a suspicious vehicle call at the airport @wsoctv pic.twitter.com/FD2bzpOpD9

The employee called police because of an increase in car break-ins.

Police said two officers saw the car leaving and tried to pull it over, but as one of the officers left the patrol vehicle, a suspect drove toward Lor, who fired shots at the car.

One question investigators will ask why one officer fired shots and the other did not.

"At some point, the driver made a move towards the officer. The officer felt like he was going to get run over, fired a couple of shots," CMPD Chief Kerr Putney said.

Lor has been placed on paid administrative leave, per police protocol.

The suspect took off, but police say a person and car matching the description arrived at the hospital with gunshot wounds.

CMPD is investigating an officer involved shooting on airport property. The officer is OK. Subject fled scene. More info will be released ASAP

“The officer felt like he was going to get run over (so he), fired a few shots,” said Charlotte-Mecklenburg police Chief Kerr Putney. “Not sure how many, but at least a couple.”

The business valet employee parking deck was shut down during the investigation. 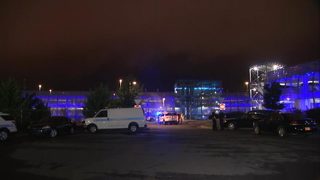 This case highlights an old problem for the airport of car break-ins. Police say the numbers for airport car break-ins are up 31 percent this year.

"I didn't know it was an issue. I assumed these parking garages were secure," passenger Barry Carter.

"I think at an airport we should be safer than at regular parking area," traveler Manik Suri said.

Officers say a lot of people assume just because the garages are well lit that nothing will happen.

CMPD statement: Out of respect for the judicial process we’re going to refrain from commenting on pending litigation.