Blackmon said he was hired as an electrician by a subcontractor and decided to quit after only two months.

“There’s plenty of projects that I’ve felt safer, I can tell you that,” Blackmon said. “I don’t understand how an individual can fall from a buck hoist unless something was left open. Maybe a latch wasn’t secure.”

State investigators are trying to determine what led to Mata-Hernandez's fall.

Police said he fell out of a construction elevator.

Blackmon told reporter Stephanie Tinoco he felt unsafe going to work, and at one time, he had reported an issue with an extension ladder he said was not safe because it was only held by a small tie wire at the top.

“I notified the safety guy. He came out and took a look at it and said, ‘Well, it looks fine to me,’” Blackmon said.

Blackmon thinks adequate training was provided at the site, but believes more could have been done to make the site safer.

“It only takes a split second, and you’re not going home to your family,” Blackmon said.

Another construction worker told investigative reporter Paul Boyd anonymously that Mata-Hernandez was a "great guy" who was pushing material into a construction elevator.

Sources told Channel 9 Mata-Hernandez recently moved to Charlotte from Mexico and had only been on the job for a week.

Police said they received a phone call saying the man fell from the building around 4 p.m. Wednesday afternoon. He was pronounced dead at the scene.

State investigators were operating out of nearby construction trailers near the accident site Thursday.

Channel 9 did some investigating into the construction company responsible for the 33-story project.

The Gilbane Building Company, based in Rhode Island, is the lead contractor for the Legacy Union office tower in Uptown.

Department of Labor records show a total of 10 site violations against the company over the past five years. None are in the Carolinas.

We found the most serious violations happened last October on a Gilbane construction project in Ohio. Specific details of the violation were not readily available online.

There are several other recent open cases with vague incident descriptions against the company, but details are not available online.

Until recently, the company had a relatively clean safety record with no serious violations, and just three years ago, Gilbane won a prestigious industry safety award.

Construction workers are typically required to wear safety harnesses and tethers that would catch a worker who falls.

It's not clear yet if those precautions were required at the time of the incident.

State records show the construction site at 620 S. Tryon St. underwent a planned safety inspection Nov. 11, 2017. No issues were reported on the summary.

Channel 9 has requested the detailed copy of that inspection.

Company officials say they're cooperating with authorities investigating the death.

The construction project on what will be the fourth-tallest building in Charlotte is still expected be completed next year.

"I would wonder, were all the safety precautions taken to make sure something like this didn't happen?” asked Gina Johnson, who was staying at a nearby hotel. “You hope that they did and, it was just some sort of weird, freak accident and not something that could have been preventable."

Statement from Gilbane Building Company, which is building the skyscraper:

"We are saddened to report that a fatal accident occurred today involving a worker at the Legacy Union construction site.

“We're gathering information on exactly what happened and have no details to share at this time.

We're working closely with the authorities to provide you with more details as they become available.

We extend our deepest condolences to those affected. They are certainly in our thoughts and prayers." 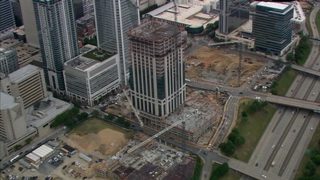