MINT HILL, N.C. — Police have identified a Rocky River High School student as the victim in a fatal crash in Mint Hill.

Officers said they responded to Lawyers Road near Bain School Road just before 7 a.m. Friday and found two vehicles in the westbound lanes stuck together.

They said the driver of one of the cars, 16-year-old Modesty Monaesia Shelton, died at the scene.

“Modesty, she was a sweet girl," her friend, Miles McNeal, said. "Every time I saw her in the hallway, she had a sweet smile.” 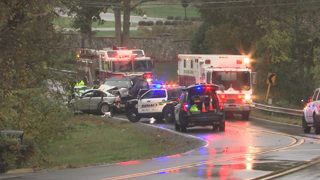 Shelton was on the school's track team.

“She was on the track team, so everybody was in the room and it hit us hard like, ‘Modesty? I thought she was in school today,'” McNeal said.

Channel 9 crews on the scene could see long skid marks on the road.

Police said the initial investigation indicates Shelton lost control of her vehicle, crossed the centerline and was hit by the other vehicle. They said speed appears to have been a factor.

The driver of the other vehicle was taken to the hospital but was released.

“It was terrible," student Rolando Tromp said. "(It is) depressing -- everyone quiet -- sad.”

The road was closed while police investigated but reopened around 11:30 a.m.

The Charlotte-Mecklenburg Police Department’s Major Crash Investigations Unit is assisting with the investigation.

#BREAKING: This is now a fatal crash that is under investigation. #cltraffic #clttraffic #clt https://t.co/f0ClNRoWJx

Friday's crash was the second deadly accident on that stretch of Lawyers Road in the past two weeks.

A driver died Oct. 24 after hitting a tree.

A neighbor told Channel 9 that stretch of road is dangerous because of a sharp curve.