Brice Williams will play for UNC Charlotte after he graduates from Hopewell High School.

His father, Henry Williams, holds the record for the 49ers' all-time leading scorer but will never get to see his son play in college.

Brice Williams hopes he lives up to his father’s legacy.

“At the end of the day, it's competitive,” Brice Williams said. “That’s going to be my record one day. I'm not going to let him keep it.”

The basketball program hasn’t participated in an NCAA tournament game since 2005.

“I feel like it’s Charlotte’s time to be back on the map,” Brice Williams said. “I feel like I'm that player who can make it all come together.”

In the early 1990s, Henry Williams was a formidable scorer with a smooth jump shot. He scored nearly 2,400 points for the 49ers. 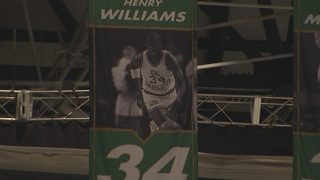 Henry Williams died in March after a near decade-long battle with kidney disease.

“It shook my confidence a little bit, just because my dad was my backbone when it came to basketball,” Brice Williams said. “(He was) always helping me move forward, giving me the brighter side of things.”

“It made me get stronger in myself,” he said. “I talked to God a little bit more, so that growth and confidence is going to push me forward come college.”

Henry Williams never pushed his son to commit to UNCC insisting the young basketball player could make the best decision for himself.

Brice Williams will be playing in Halton Arena wearing the name “Williams” on his back next fall. It was an easy decision for Brice Williams.

“I just want to stand there -- have a crowd roar behind me -- have my hands on my hips like a super hero, like it’s going to be unreal,” Brice Williams said. “I know it is.”

Brice Williams didn't start getting serious about playing basketball at the next level until his sophomore year in high school.