JOHNS COUNTY, Fla. — The threat of Hurricane Irma is weighing heavily on the minds of people living in St. Johns County, Florida, 11 months after Hurricane Matthew slammed the shore of Vilano Beach.

"We lost everything from basically 4 feet down in the house," Martha Nourse said.

Nourse, her husband and their two dogs have been living in a trailer parked in front of their home since Hurricane Matthew left the house uninhabitable.

Time-lapse video from after Hurricane Matthew hit the area shows water about 9 or 10 feet deep making its way into dozens of Vilano Beach homes. 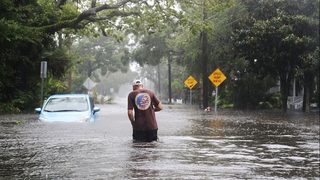 Tammy Tombroff, who lives across the street from Nourse, said she just moved back into her home.

"Piece by piece, I'm putting this back together," she said. "I've only just gotten furniture like, last week."

Down the road, Jeff Troxell is reminded daily of Hurricane Matthew's damage. His family has left marks on the home's door that show how high the water got during the storm.

Other neighbors said they can't help but worry.

"It is pretty scary," Tombroff said. "Just now getting it back together, and what would that be like -- I can't imagine."

Other neighbors said that they are buying generators and other supplies.

One person killed in shooting in Cornelius, police say