I even had a T-shirt to prove it.

We will be keeping you posted so make sure you return to this blog!

On our way to the beach! #HurricaneFlorence pic.twitter.com/xhW2xqAr15

We drove from Charlotte to North Topsail Beach on Tuesday afternoon ahead of the monster storm HURRICANE FLORENCE. On the way to the beach, droves of vehicles were traveling on the highway in the opposite direction we were.

[STEP-BY-STEP: How to customize your WSOCTV news app experience]

Gasoline was scarce as well, as we topped off Channel 9 Stormcam as often as we could. We made it to the coast safe and sound.

...Earlier in the day

Once we grabbed a quick breakfast at the hotel, we headed out of the door to get closer to the coast.
As I mentioned yesterday, authorities set up a roadblock to Topsail Island and Stormcam had no problem getting through it. The officer kindly waved us through.
There were a few emergency folks on the island but other than that, it was just us.
The waves and wind have picked up quite a bit – as to be expected. 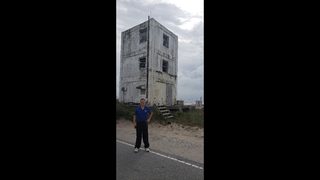 That was a U.S. military program that tested missiles on the island, so they built 8 observation towers made of concrete that could withstand a blast. Seven still stand today along the Topsail Island coast, from what I understand.
Oh well, police just kicked us off Topsail Island.
Police in a different jurisdiction allowed us on the north side of Topsail, so we can do some shoots for the noon forecast on the beach.
Here is the deal everyone. I served in the U.S. Navy for 6 years, on a destroyer for 4 years, and crossed the pond twice. I've seen my share of heavy seas.
What we saw at Topsail at about noon was VERY serious and the eye of the storm is still 150 miles away.
Please, please, please take this hurricane very seriously.

More from Topsail with meteorologist John Ahrens. It's getting bad out there! Our team is covering this storm from all angles with extended coverage starting at 4 p.m. on Channel 9.

Return to this blog! The day is young.

On a bright, sunny morning, our crew went to check out of the Quality Inn that was expected to shut down. Good News! We can keep our rooms tonight!

The hotel manager told us the North Topsail Police Department is going to use the hotel as its new headquarters during the storm. Authorities are going to set up a checkpoint right outside to keep people from entering the beach. Oh yeah, storm surge could be 10 feet. Luckily, our rooms are on the second floor, if that matters?

Next, we followed up on the lead from the night before at the diner. (See Tuesday's entry below)

Shrimpers at a cove at Mitchell Seafood north of North Topsail were going through extra measures to secure their vessels. In the cove, they installed concrete posts the day before.

Those posts dig 10 feet into the ground, to tie down the boats up in the cove.

They will be, basically, one on top of the other.

The shrimpers are a bunch of good people that shared a lot of local information with us.

They even told us we can hang out here during the storm because it’s on high ground.

And for some reason, John still drinks hot coffee when it’s very hot and very muggy...

We finished our noon hit (TV term) at the shrimp boat cove and our stomachs were rumbling from hunger, so it was time for lunch.

Bummer, not a single restaurant was open.  No seafood restaurants, bar and grills, McDonald’s, Hardee’s… You name it, it was closed.

Some gas stations were open, but we are here for 3-4 days. We needed provisions, so it was time to go to the grocery store.

In the 20 miles we drove from the Camp Lejeune area to Surf City, only one store was open. It was a Publix. They even had bread!

While checking out, we asked the cashier when Publix is closing for the storm. It was closing in about an hour. That was a close call!

Next stop, a spot on the beach for our LIVE hits.

A friend of WSOC-TV said we could use his beach house in nearby Surf City to use as base camp. Ehhh. That was very nice of him, but it’s right on the ocean and would be WAAAY to risky during Florence.

However, we could use his house for Wednesday’s Channel 9 extended coverage of Hurricane Florence, which started at 4 p.m.

Conditions on the beach were not so bad by late Wednesday afternoon. Waves seemed more rough than normal, but nothing too out of the ordinary.

What was not ordinary? NOONE was on the beach.

By 6 p.m., John pointed out an outer band from Florence north of the island. It was hugging the North Carolina coast.

That's when I noticed the waves getting choppy and the wind picking up. It was quite a difference than 24 hours prior to that. Florence's first rainfall happened at about 6:30 p.m.. It wasn't bad. It was actually a quite calming summer-like shower. That won't last for long.

As the sunset, we headed back to the hotel.

We will keep you posted on any new, interesting developments!

We drove Channel 9 StormCam to North Topsail Beach and it was a ghost town. There was a mandatory evacuation for Onslow County -- very few vehicles and people. The only ones still here were locals boarding up their homes and businesses.

We’ve seen locals undermined hurricanes before, but not this time.

You could see worry and fear in their eyes as they talk about comparisons between the destructive Hurricane Hazel in 1954 and Florence. Two different hurricanes wiped out two different roads. Will it happen again?

We got to the hotel near the beach and were told it was shutting down the next day, Wednesday.

Other hotels were doing the same, so we had no place to stay for the rest of the week.

After our live hits starting at 5 p.m. on the newscasts, it was dinnertime!

Some restaurants were open. One turned us away because they stopped serving customers. (Still don't really know why. Maybe out of food?)

We went to a diner, Highway 55, on Highway 210 and got a lead about a lot of shrimpers tying up their boats before Florence gets here. A sight to see?

We returned to the Quality Inn for our first night’s sleep at the beach.

One more thing, it’s hot and muggy as you can imagine as a megastorm in The Atlantic approaches.