US House District 9 race investigation: How we got here

Early in-person voting began at 8 a.m. Aug. 21 at the Hal Marshall building in uptown Charlotte for a special election in the state's District 9 congressional race.

The race gained national attention after Channel 9 began an investigation into election fraud.

The election takes place on Sept. 10. 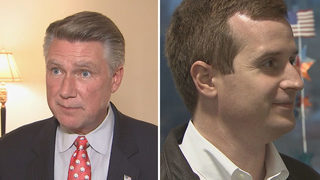 The bipartisan board is investigating "claims of irregularities and fraudulent activities related to absentee by-mail voting and potentially other matters in the 9th Congressional District contest." The board is composed of four Republicans, four Democrats and one unaffiliated member. The first vote to investigate the claims and not certify the results was unanimous.

The affidavits go into detail about unusual and illegal activities surrounding absentee ballots. One person claimed a woman came by her house to pick up her absentee-by-mail ballot, which was unsealed and unsigned. Another person also claimed a woman came by to pick up her ballot. The voter said she only selected two races and claimed the woman told her she would finish it for her. Other affidavits go into detail about absentee-by-mail ballots that voters didn't request. Two affidavits also introduce us to the man who appears to be at the center of the investigation, Leslie McCrae Dowless Jr.

>> Nov. 30: The North Carolina Board of Elections and Ethics Enforcement votes to hold an evidentiary hearing about irregularities in the election on or before Dec. 21

The board's discussions have been in closed session, so the specifics of the irregularities it's investigating have not been released.

[RELATED: NC Board of Elections votes to hold hearing on US House District 9 election]

[RELATED: NC State Board of Elections Chairman resigns amid controversy]

Dowless is the vice chair of the Bladen County Soil and Water Conservation District, an elected position. He is also an electioneer with a criminal past dating back to the 80s. He was convicted of passing a worthless check, perjury and felony fraud and served six months behind bars.

McCrae is well-known in Bladen County political circles. Campaign finance reports show his political involvement dates back to at least 2010.

[RELATED: Who is McCrae Dowless, man who appears to be center of 9th District investigation?]

A source provided Channel 9 with photocopies of 159 submitted and accepted absentee-by-mail envelopes. Unless a notary is present, each ballot has to be signed by two witnesses. What Channel 9 found was eight people signed as a witness for at least 10 ballots. Three people signed as a witness for more than 40 ballots. This in and of itself is rare.

Channel 9 spoke to one of those witnesses who said Dowless paid her $75 to $100 a week to pick up absentee ballots, which is illegal.

>> Dec. 4: Channel 9 speaks with a second woman who says she was paid to collect absentee ballots

[RELATED: Second woman claims she was paid to pick up ballots in U.S. House District 9 race]

>>Dec. 4: Incoming House Majority Leader Steny Hoyer says Harris will not be seated if allegations of election fraud carry over into next year

>>Dec. 5: State investigators spotted for the first time on the ground in Bladen County

Only Channel 9 was there as investigators left the apartment on Pecan Street in the Village Oak Apartments. Both had handfuls of papers and notepads. Three sources told Channel 9 the investigators were Kim Strach, the state's chief elections official, and Joan Fleming, the NCSBE chief investigator.

>>Dec. 5: Subpoenas issued for the Harris campaign, the Jim McVicker campaign and Red Dome, the political consulting firm hired by Harris, according to an NCSBE spokesperson.

They said the investigation in absentee irregularities in Bladen County needs to be prompt, thorough and nonpartisan.

>>Dec. 8: Vice chair of Bladen County Board of Elections resigns

>>Dec. 28: The board investigating allegations of ballot fraud disbands after a state court ruling, and Gov. Cooper announces he will appoint a new board to serve through Jan. 31

[RELATED: NC governor to appoint new state Elections Board to serve through January]

>>Dec. 28: Incoming House majority leader says Harris will not be seated on Jan. 3 as a member of the 116th Congress

"Given the now well-documented election fraud that took place in NC-09, Democrats would object to any attempt by Mr. Harris to be seated on Jan. 3," Rep. Steny Hoyer said. "In this instance, the integrity of our democratic process outweighs concerns about the seat being vacant at the start of the new Congress."

Cooper said a hearing to address the 9th District investigation on Jan. 11 cannot go forward without the interim board.

>>Jan. 3: Harris campaign files a petition for a writ of mandamus in Wake County Superior Court, calling for the certification of Harris as the winner in the 9th Congressional District election

>> Jan. 15: A hearing on Harris' petition for certification has been set for Jan. 22 at 10 a.m. in Wake County Superior Court

NEW: A hearing on Mark Harris' petition for certification has been set for January 22 at 10 a.m. in Wake County Superior Court #NC09 #ncpol @wsoctv pic.twitter.com/ibvrDIM9rg

The District Attorney's Office said they charged Caitlyn Croom, Matthew Mathis, Tonia Gordon and Rebecca Thompson. Each faces one count of conspiracy to obstruct justice and one count of possession of absentee ballot.

[RELATED: NC Board of Elections to decide date of new District 9 election]

>>July 30:  A grand jury has indicted Leslie McCrae Dowless on more charges in connection with the 9th Congressional District election.

Dowless is facing charges of felony obstruction of justice, perjury, solicitation to commit perjury, conspiracy to obstruct justice and possession of absentee ballot.

These charges are related to the #NC09 (Harris v McCready) election. Dowless was previously indicted for actions during the 16 general and 18 primary https://t.co/AlcOzIpUs7

Warrant: Teen could be connected to several Kia, Hyundai thefts across Charlotte