WAYNESVILLE, N.C. — Law enforcement officers across multiple counties escorted the body of Riley Howell to his hometown on Thursday.

People lined the streets with American flags, officers stood at attention,and paramedics paid respects from an overpass. This is usually something reserved for military service members, police officers, or firefighters killed in the line of duty.

Residents of Waynesville began to line the streets of the town more than an hour before the processional was set to arrive.

Eyewitness News reporter Dave Faherty spoke with several residents who came out Thursday, talking about why they wanted to honor the 21-year-old who is credited with stopping the UNC Charlotte shooting from being much worse.

"He was such an amazing kid. He's always been outstanding. I'm actually very proud to say that I've known him," friend Mary Warren said.

Dozens of law enforcement agencies from across western North Carolina participated in the procession.

“I would estimate there are hundreds of people at this intersection alone,” resident Lynn Roberts told Channel 9. “But on the drive over here, I could see people standing on some of the overpasses on Interstate 40 two hours ago.”

Roberts said her son served in the military, doing two tours in Afghanistan. She said she knew her son was in danger at the time, but added that Riley's family didn't when he went to school at UNCC.

"He didn't choose war. He chose an education," Roberts said. "And he comes home in a hearse and that's not right in America. If we can't protect our most valued assets, our kids, then what is the point."

Several people who came out to pay tribute to Riley said they weren’t surprised he chose to tackle the shooting suspect – putting others' lives before his. The gathering along the roads of Waynesville also including military veterans who did not know Riley personally but were inspired by his bravery and wanted to pay their respects.

Residents Larry and Tish Hudson said they arrived in downtown Waynesville more than an hour before the procession arrived from Charlotte.

Larry, a retired colonel in the air force, said he never met Howell but believes his actions at UNCC should be honored the same way someone who has died while serving the United States.

"Unequivocally a hero," Larry Hudson said. "That's what brought me out here. He is a hero and the respect I have for people who put themselves before others."

"He acted, saw it, and did it. With no regard to anything else -- hero," Tish Hudson said.

After Pender EMS & Fire heard Riley had a dream of working as a firefighter or joining the military, the department put him “on assignment” Thursday.

Ryan Johnston, with Pender County Fire & EMS, posted pictures of Howell listed on the department’s assignment boards and helmets with his last name on them. 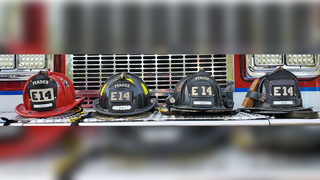 “Thank you, Riley for paying it all so others may live!” Johnston’s post said.