A meme used in a Rock Hill high school presentation drew widespread attention after a picture of it was posted to social media on Thursday.

It then goes on to list symnonyms for a "conservative." It showed words like "stingy, miserly, regressive, narrow-minded, reactionary, bigoted, prejudiced, and biased." 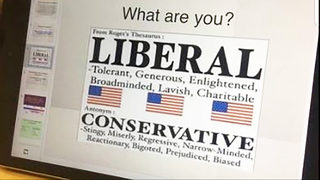 A student in the class sent a picture of the controversial image to his father, who then posted it on Facebook saying, "I am tired of these schools indoctrinating our kids. This needs to stop."

The school said the teacher did not make the meme, but included it in her presentation.

In a statement sent to parents, school leaders said the presentation was intended to provide an overview of political parties as well as the fiscal and social issues that have shaped the American political system.

They added the teacher stressed that the labels of "conservative" and "liberal" have changed over the years and do not line up with today's Republican and Democrat parties.

A single slide included as part of a larger, more comprehensive presentation during a US History class at Rock Hill High School on Thursday, May 2, has been shared on social media. The slide drawing attention on social media includes a graphic attributed to Roget’s Thesaurus showing the terms “liberal” and “conservative”.  In the graphic, synonyms of each word are displayed.  Synonyms associated with “conservative”, according to Roget’s Thesaurus, are displayed as antonyms, or negative, as compared with the words associated with “liberal”.  The presentation reviewed US History standard 8.4, which seeks to “analyze the causes and consequences of the resurgence of the conservative movement, including social and cultural changes of the 1960s and 1970s, Supreme Court decisions on integration and abortion, the economic and social policies of the Reagan administration , and the role of the media.”

The full presentation sought to provide an overview of political parties, and social and fiscal issues that have shaped the American political system. The teacher, on at least two occasions, stressed to students that labels of “conservative” and “liberal” have changed throughout history and each is not synonymous with today’s Republican and Democrat parties. The presentation focused on the basic beliefs of conservatives and liberals, and a follow-up activity asks students to identify conservative and liberal positions on issues and explain why each side takes the position(s) that it does.

Moving forward, this slide and PowerPoint will not be used when teaching state standard 8.4 in US History. The Social Studies Department will re-examine the resources used to teach this standard.

Former student Jamal Tait said he wanted to know the context of the photo.

"Context, you can take that and run with it and get one million likes and the whole purpose for what was intended could be lost in that message," Tait said.

Parents, however, said they were concerned the image was pushing an agenda.

"I don't think it's a fair assessment because I am a conservative. I wouldn't be too happy with those being the ways to judge me," parent Bonnie Hunter said. "I would hope that we can take away the division that we have in our country now a days instead of inflame it."