SALISBURY, N.C. — Three arrests have been made after deputies said a Rowan County 19-year-old was killed and dismembered.

Officials said Thursday that Madison Harrington, 18, and Lauren Grimes, 19,  were charged with accessory after the fact to murder for their alleged assistance in the concealment of the murder of Michael Elijah Earley. 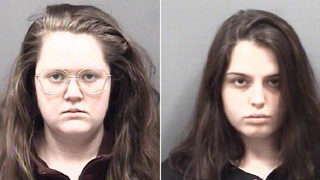 Carlos Rosas Jr., 19, was arrested and charged Wednesday night with murder and felony concealment of death.

Earley was last seen around 10 p.m. Sunday in Rockwell and his girlfriend reported him missing on Monday.

[ [ALSO READ: Jayme Closs to be given $25K reward after she saved herself from accused kidnapper] ]

There had been a desperate search for Easley up until Wednesday when investigators announced that he was murdered.

Rosas is in the Rowan County jail under no bond and Harrington is under a $500,000 bond.

Warrants said Rosas tried to cover up the murder by cutting Earley's body into pieces, which he then tried to get rid of in a secluded area.

According to an arrest warrant, Rosas "unlawfully, willfully and feloniously did attempt to conceal evidence of the death of Michael Earley by knowingly and willfully dismembering and destroying human remains, including removing body parts of Michael Earley."

The warrant went on to say that Rosas "unlawfully, willfully and feloniously did of malice aforethought kill and murder Michael Earley."

Investigators described what led up to Earley's death as a "small transaction for drugs that got out of hand." Deputies believe it was marijuana.

Rowan County Sheriff's Office investigators said at a press conference Thursday they do not believe that Earley and Rosas knew each other prior to Sunday's drug buy gone bad.

Michael Earley's parents spoke by phone with Eyewitness News reporter Tina Terry on Thursday. They described their son as someone who was close with his family -- particularly his three brothers.

"He was a good kid. He didn't get in trouble," Steve Earley, Michael's father, told Channel 9. "He worked ever since he was 15-and-a-half."

The South Rowan High School graduate was proud of his credit score and had goals for his future: buying a home and providing for his family.

"He had goals in life," Steve said. "He wanted something and he was willing to work hard for it."

Anyone with information is asked to call Sgt. Rodney Mahaley at the Rowan County Sheriff's Office at (704) 216-8711 or dial 911. The State Bureau of Investigation is assisting in the investigation.

>> Reading this story in our app? The new "Follow the Lead" feature allows you to tap the blue tag indicated with a '+' to subscribe to alerts on the very latest breaking news updates.