TROUTMAN, N.C. — At least five people were injured, two with serious injuries, after a tree came crashing down on a wagon at Zootastic Park in Iredell County Saturday afternoon.

Zootastic is a privately owned zoo located in Troutman.

A witness said the wagon's metal cover collapsed on a woman's head and a young boy badly injured his leg. Both were rushed to a hospital.

At least three others were hurt.

Parker said his wife was inches from where the tree landed.

“Now, I realize that if that tree didn't fall between the trailers more people would have gotten hurt,” he said. “It's a good thing nobody died.”

Scottie Brown, the park’s owner, told Channel 9 he wasn’t aboard the wagon, but he quickly heard about the incident.

Brown said the tree trunk landed in between two wagons and avoided direct contact with the wagon that was struck. 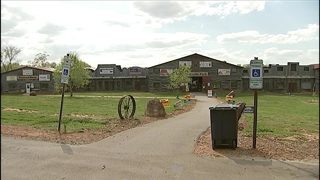 Parker said that once the tree crashed, the people in the wagon tried to get out, but some couldn’t.

“We all kind of hunkered down between the seat,” Parker said.

Brown isn’t sure why the tree fell, but he said at least 10,000 people took a wagon on the two-day stretch on Saturday.

“It’s not a bad idea to get an arborist in here and let him check them because we don't know,” Brown said.