What online platforms are kids and teens using and how can they do it safely?

CHARLOTTE — Statistics from the National Center for Missing and Exploited Children highlight a drastic rise in child sex crimes. The agency found that from 2019 to 2020, the number of tips regarding online enticement, which is when someone solicits a child online, jumped by 97%.

It leads many parents to question what kinds of online platforms their kids are using, and how they can be protected while using them.

When it comes to social media, more kids are using TikTok

According to the Pew Research Center, TikTok has become one of the top online platforms for teenagers in the United States, while the number of teens who use Facebook has seen a steep decline.

67% of teens say they use TikTok, with 16% of all teens saying they use it almost constantly, the study showed.

Overall, YouTube tops the 2022 teen online landscape among platforms covered in the survey, as it is used by 95% of teens. Then TikTok, followed by Instagram and Snapchat, which are both used by about 6 in 10 teens. After those platforms comes Facebook with 32%, and smaller shares who use Twitter, the streaming service Twitch, messaging app WhatsApp, Reddit and Tumblr. 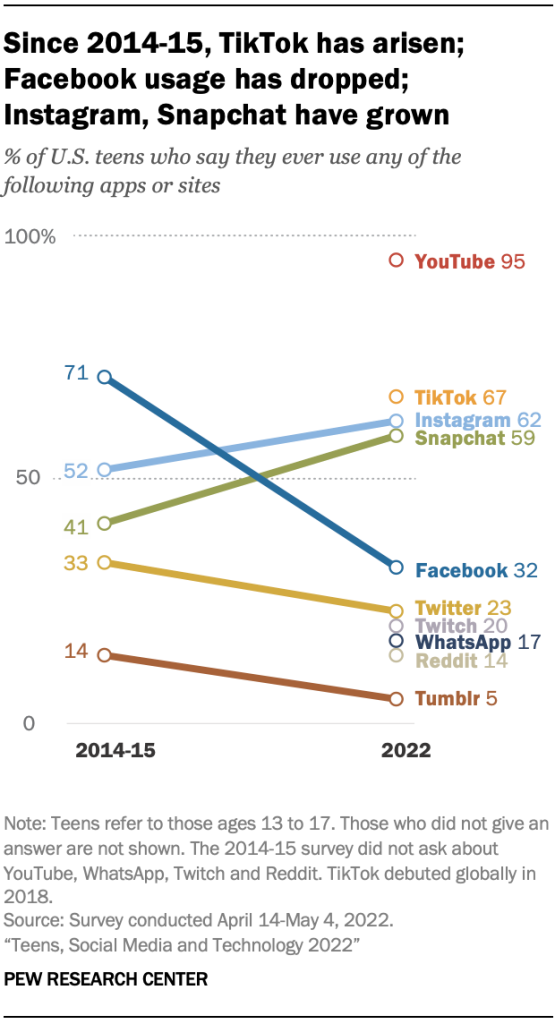 The number of teens who say they are online almost constantly has roughly doubled since the survey was last conducted in 2014 to 2015 -- it stands at 46% now, but was only 24% then.

The online platforms teens flock to differ slightly based on gender. Teen girls are more likely than teen boys to say they ever use TikTok, Instagram and Snapchat, while boys are more likely to use Twitch and Reddit. Boys also report using YouTube at higher rates than girls, although the vast majority of teens use this platform regardless of gender. 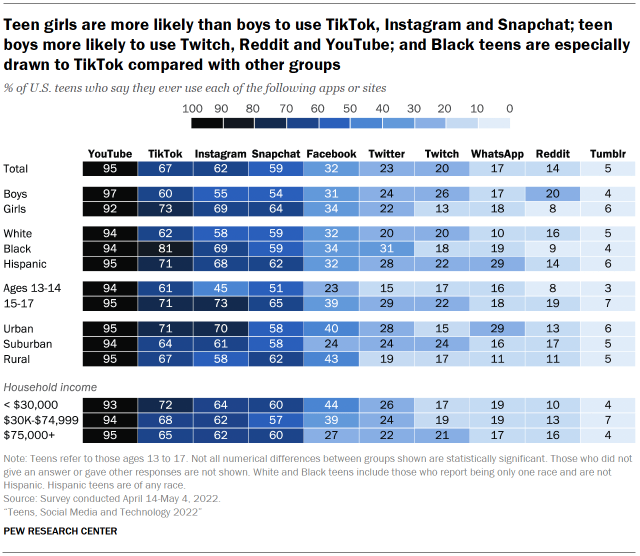 Then, there are the apps that don’t fit the traditional description of social media, like Kik and Twitch.

Twitch is a livestreaming service that’s interactive. Users can create content that spans gaming, entertainment, sports, music and more, its website says. The site also says nearly 75% of its viewers are between 16 and 34 years old.

A quick search of the word “Kik” on the U.S. Department of Justice website produces hundreds of hits -- hundreds of cases where adults were convicted of sex crimes that were carried out after messaging children and teens through the app. The app was founded as a way to chat between people with Blackberry phones and Androids and iPhones. Users chat anonymously, making it harder to identify them than with something like WhatsApp.

According to an earlier Pew study from 2015, the most common spots for teens meeting friends online are social media sites (64% of teens who have made a friend online met someone via social media), followed by playing networked video games (36%).

Researchers also said 42% of all teens spend time with friends on messaging apps like Kik and WhatsApp, with 14% doing so every day.

How can kids and teens use social media safely?

So how can you make sure kids are staying safe while they’re using social media? For one thing, all of the apps mentioned in this story have an age restriction of at least 13 years old. But that’s hard to enforce when that information can be falsified, so what else are the platforms doing to protect children?

In December, Instagram announced new features the company is developing to make the app safer for teens, including no longer allowing people to tag or mention teens that don’t follow them, and changing what content Instagram recommends to teens. The platform also has a portion of its website that’s dedicated to parents who want to help their kids use the app safely.

Instagram isn’t alone -- Twitch has a page dedicated to user safety, with sections that detail their recommendations for young teens on their platform.

Kik has a “Safety Center,” where it offers advice to parents, users and law enforcement. Today’s safety improvements came after an update in 2016, when Kik made a new guide for parents in the wake of the murder of Nicole Lovell, a seventh-grader who chatted over Kik with the man who would become her killer.

TikTok outlines its policies for young users, including tips for parents on how to talk to their kids about how they use the app.

Snapchat just recently introduced the Family Center, which lets parents see who their teens are messaging -- without seeing the content of the messages.

Twitter automatically locks the account of a user when the platform learns they are under the age of 13.

You can manage your child’s capabilities on Xbox, including their ability to join multiplayer online games, create and join clubs, broadcast their gameplay, add friends and chat. Parents can also choose who can communicate with their child, select who can see what their child watches or plays and decide what profile information others can see.

Screen Strong has resources for parents who want to take their kids and/or families off social media altogether. Click here for information. Screen Strong also has information for parents interested in getting a phone for their child that isn’t a smartphone. Read more here.

Common Sense Media put together a list of safer social media and messaging apps for children. You can click here for more information.

If you or someone you know sees something suspicious online, you can report it to the National Center for Missing and Exploited Children. The NCMEC tip line is 1-800-THE-LOST (800-843-5678). You can also report it online by clicking here.

The Associated Press contributed to this report.

“Any abuse of minors is abhorrent and against our policies. If we become aware of any sexual content involving minors, whether it’s identified through our proactive detection technology or reported to us through our confidential in-app reporting tools, we immediately remove it and report it to the authorities. While we designed Snapchat to prioritize the safety of our entire community, we have extra protections in place to make it harder for strangers to find and contact our younger users. Accounts for Snapchatters under 18 are set to private by default. They need to be mutual friends with another user before they can begin communicating, are not allowed to have public profiles and cannot show up as a friend suggestion to another person unless they have friends in common. We also offer in-app tools to give parents insight into who their teens are friends with on our app.”

CMPD: Arrests made, guns and drugs seized amid street takeovers in Charlotte