Will a hurricane be named after you this season? 2018 storm names are here

What to do when your home is damaged in a storm Home Damaged by a storm? Here's what you should do right now. (NCD)

Hurricane season doesn’t start until June 1, but if you’re on the list of 2018 storm names, you may want to prepare for the possibility that a hurricane with your name on it may form up this year.

Tropical cyclones get monikers based on their basin and names that are familiar in the region. There is a six-year rotating list, with 2018’s names a repeat of 2012.

BREAKING: Above average season forecast for 2018 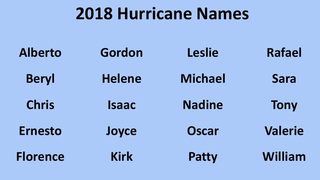 Hurricane names are selected by the World Meteorological Organization and are usually common names associated with the ethnicity of the basin that would be affected by the storms.

“For example, in the Atlantic basin, the majority of storms have English names, but there are also a number of Hispanic-origin names as well as a few French names,” said National Hurricane Center spokesman Dennis Feltgen during an interview about 2015’s Hurricane Henri. “For the eastern North Pacific basin, the majority of names are of Hispanic origin, as the impacted countries are Mexico, Guatemala, and other nations of Central America.”

Everything you need to know about the hurricane season is on The Palm Beach Post’s Storm 2018 page.

There are six lists in rotation, which are maintained and updated by the World Meteorological Organization.

A name can be removed from the list if a storm hits and is particularly deadly or costly.

For example, there will not be another Hurricane Andrew, after the devastating 1992 Category 5 storm. And the 2004 and 2005 seasons saw a whole slew of names retired from the list including, Charley, Frances, Ivan, Jeanne, Dennis, Katrina, Rita, Stan and Wilma.

Hurricane Joaquin is also off the list. Hurricanes Matthew and Otto were replaced with Martin and Owen after the 2016 season.

Hurricane season runs June 1 through the end of November.