The last batch of snow was moving over Charlotte just after noon Saturday and was expected to clear out by mid-afternoon.

The wet and frigid conditions leave a threat for very slick roadways and black ice overnight and into Sunday morning, especially northwest of Charlotte.

After midnight, temperatures will dip to the upper 20s and the moisture remaining from the rain and snow will freeze and cause some significant problems on the roads.

Roads will begin to freeze around 1 a.m. Sunday.

Temperatures will warm into the lower 40s with sunshine in the afternoon.

Snow is switching over to rain south of Charlotte. This last band of wintry weather is moving through quickly, it should be clearing out within the next hour or so. Any snow that falls won't add up to much. pic.twitter.com/ZNGs7l0LTc

Another batch of snow moved through the mountains Saturday morning, which brought an additional one to two inches of snow.

The heaviest snowfall totals were in the mountains and foothills, as well as closer to the I-40 corridor.

Snow didn't add up to much in Charlotte, but some areas just north of the city saw some accumulation on grassy areas.

We are tracking a few snow flurries in Charlotte right now. This final band of snow will push through quickly, it is not expecting to add up to much. #CLTSnow pic.twitter.com/awWdIsISgs

The main travel issues will be in the mountains and foothills where most of the snow fell Friday.

Temperatures on Saturday had highs only in the low 40s.

Additional outages have resulted from heavy snow piling on limbs and trees, tearing down power lines and breaking power poles.

Extra contract crews were brought in to assist Blue Ridge Energy and get power back on as soon as possible.

Caldwell County update as of 11 a.m.:

Some visitors to Blowing Rock told Channel 9 that they were enjoying Saturday’s winter weather, while shop and restaurant owners said they felt the snow impacted business.

One family from Georgia said they were loving the cold conditions.

"It's been absolutely beautiful. We love it up here," tourist Mike Lish said.

Other visitors said they weren’t as enthusiastic about the weather.

"We didn't think it was going to snow this much," tourist Brandon Dyer said.

Dyer and his 6-year-old daughter enjoyed the weather Saturday, but said they were thinking about returning home early.

The owner of Alpine Village Inn, Kathy Smith, said she lost a lot of business on Friday -- about half of her reservations were canceled.

"It's the road conditions and accidents," Smith said.

Smith said the road up the mountain is clear and that she’s counting on the snow to attract skiers.

Business owner Kevin Tincher was clearing a path to his store and said business was slow Friday afternoon, but picked up during the evening hours.

"There might be a few places closed today. Want more places open when people start rolling through town," Tincher said.

Store owners told Channel 9 that they want people to know they’re open for business Saturday, despite the snowy weather.

Concerns on the roads as winter weather hits

Road conditions are the biggest concern in Boone.

Officials said there were more than 50 wrecks Friday in Watauga County. None of those wrecks were fatal, and there is a five-hour wait for tows.

Here's what our drive looks like on Highway 321 in Lenoir @wsoctv pic.twitter.com/NCEoe7560s

"They're really good out here about clearing the roads,” Boone resident Daniel Olzer said “It starts to get really bad, but they get the snow plows to come through."

NCDOT crews have been making rounds since early Friday and are expected to be out throughout the night.

Town officials said there are safety concerns with the increased snowfall and freezing temperatures.

"I put chains on my car because where I live I have to go up a hill with ice,” said Ken Newsome, who was visiting Boone.

The Highway Patrol said it has responded to dozens of crashes in Gaston and Cleveland counties, while Medic officials are planning for extra calls throughout the night in Charlotte. 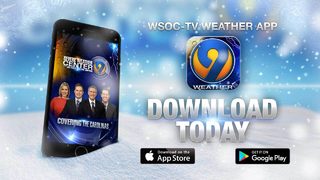 Channel 9 spoke with a truck driver who has been trying to navigate through the wintry mess.

Howard Summers, who is driving without a load, said it's much easier for him to hydroplane.

To prevent from hydroplaning, he's been driving with a partner, and tail a truck to help him keep a safe distance, should he need to stop.

“And he's heavy enough if he sees water or slush on the road, he can move most of it out of my way because I will break traction pretty easily,” Summers said.

Reporter Ken Lemon was in Lincolnton on Friday morning where cold rain was falling. As the temperatures continue to fall, emergency crews were getting ready in case there were traffic accidents.

“If the roads start getting bad, we do have a couple of trucks that will be responding out first that are four-wheel drive vehicles if we need to,” said South Ford Fire Department Capt. Gregg Raper.

In Lincolnton, the weather changed from cold rain to a snow globe.

South Fork Volunteer Fire Station officials said they were testing equipment, making sure it was ready to use if they needed to remove a downed tree or respond to a weather-related crash.

Ok...you can’t tell in this picture, but it is SNOWING in Statesville ❄️ Plows are ready if need be! @WSOCWeather @wsoctv pic.twitter.com/9Q9ko3edB6

North Carolina’s Department of Transportation had crews prepping for the weather by treating roads with brine, a salt-water mixture that helps keep ice from bonding to the pavement, in Iredell, Gaston, Lincoln, Cleveland, and Alexander counties.

“We've been preparing,” said Rob Lyerly with the city of Statesville. “We put our snowplows on and have everyone on standby, ready for whatever might come, especially in the overnight hours. (There) could be some slick spots out there.”

Statewide, North Carolina Department of Transportation officials said more than 1,000 employees worked to treat the slick roads, and more than 50,100 gallons of brine and 2,703 tons of salt was used.

DOT officials said the biggest concern is ice on bridges and overpasses, as well as any curves or turning lanes with standing water that may be frozen.

State mountain parks to close due to snow

North Carolina state parks won’t allow camping or hiking at many of the mountain region parks this weekend because of the snow.

Park officials said many of the cabins will be closed.

Snow arrival brings thrills to some

Many people Channel 9 spoke with said they were thrilled to see some wintry weather.

"We're excited," said Alan Bright, who was visiting friends. "We're from upstate South Carolina so we try to get up here every first December weekend to celebrate her birthday, so this is a birthday gift for her."

What do students at Appalachian State University do after classes were canceled?

Some of them went sledding.

Students are in the middle of final exams.

“Boone is very friendly,” freshman Lisa Conforti said. “I have a couple friends who go to UNC Asheville and everyone is inside in blankets, but out here, half the campus is outside playing in snow and having fun.”

“It's beautiful here,” said Peter Specht, who was visiting Blowing Rock. “I can't believe stores are shutting down. I guess they have to worry about getting home with the hills and everything.”

Snowfall forced North Carolina's governor to postpone two events in the western part of the state.

Gov. Roy Cooper had been scheduled to discuss the opioid crisis and visit a nonprofit that operates a halfway house and soup kitchen in Waynesville, which is west of Asheville. Forecasters said the mountainous area could get as much as six inches of snow from a winter storm that was blowing in Friday.

A news release said the appearances were postponed and will be rescheduled.

He was originally scheduled to visit the Haywood Pathways Center and then hold a roundtable discussion on the opioid crisis at a nearby government building.