'I love you, Bobby': Loved ones gather to say final goodbyes to slain Butler HS student

[GALLERY: 'I love you, Bobby': Loved ones gather to say final goodbyes to slain Butler student]

A visitation was scheduled for noon at Progressive Baptist Church in west Charlotte and the funeral followed at 1 p.m.

“He was a role model. He was a friend and confidant. He was a child that would make any mother or father beyond proud to say, ‘That’s my son!’”

That’s how the family describes 16-year-old Bobby McKeithen in the program.

There won’t be a dry eye in this sanctuary. #ButlerStrong pic.twitter.com/CpLmBomF4N

At the funeral, Bobby's brother Ahmari McKeithen asked teenagers to be kind to one another.

"We forget that we are brothers and sisters," Ahmari McKeithen said. "God told us to love each other as he loves us. If we were going that, we wouldn't be here right now, and Bobby would still be breathing. I love you Bobby. Rest in Peace."

“God told us to love each other as he loves us. If we were doing that we wouldn’t be here right now, and Bobby would still be breathing.”

One at a time, while overcoming heartbreak, friends and family shared their memories of Bobby McKeithen and how he cared for them.

"I know, right now, you are standing next to me telling me to wipe these tears and pick my head up," friend Anna O'Connell said.

"I don't have all the answers, but I do know this with certainty, we're going to use this to cause a positive change at Butler High School," Legrand said. "Above all, we're going to miss Bobby."

The family graciously welcomed media to the service, so that the community can mourn with them. https://t.co/GpYXvm6wo9

Other community leaders asked that Bobby's death not be in vain, calling on those in the church sanctuary, especially teenagers, to be messengers of love.

"This is how we're going to change our world," County Commissioner Pat Cotham said.

The services came just five days after McKeithen was gunned down by a fellow classmate in a Butler High School hallway.

Dozens of family and friends gathered for a vigil in honor of McKeithen at Camp Greene Park on Thursday night. 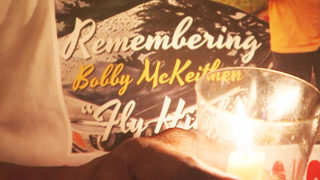 McKeithen's father said his son lost his life over foolishness and family members want him to be remembered as a sweet and loving young man.

Police said 16-year-old Jatwan Cuffie got into a fight with McKeithen, pulled out a gun and shot him in a hallway full of students just minutes before the first class of the day began.

Channel 9 learned that the shooting stemmed from a fight that occurred days before.

Charlotte-Mecklenburg Schools Superintendent Clayton Wilcox called the incident a case of bullying that "escalated out of control."

Cuffie is charged as an adult with first-degree murder and is being held in the Mecklenburg County jail.

One person hospitalized after shooting at Friendship Sportsplex, police say