STATESVILLE, N.C. — Investigators returned Tuesday morning to the scene of a massive fire at an old Statesville plant as they try to figure out what started the blaze.

The flames broke out about 8 p.m. Monday at the Maymead asphalt plant on Bostian Bridge Drive, off Buffalo Shoals Road.

Channel 9 learned one of the employees, who is a former fire chief, got on a loader and dumped gravel to keep the liquid asphalt from spreading by building a barricade.

Photos and video from the scene showed flames leaping 50 feet into the air and smoke could be seen billowing into the air for miles.

There are actually two plants on the property and officials told Channel 9 that the old plant caught fire near a mixer used to heat asphalt. The new plant has yet to open.

Breaking: 13 agencies responding to a huge fire at the Maymead asphalt plant in Statesville @wsoctv pic.twitter.com/UYDVETz2PD

Night shift workers had just clocked in when the fire started, officials said. There were no injuries reported.

Between 50 and 50 firefighters from 13 agencies responded to fight the fire and were able to get it under control around 10 p.m.

Channel 9 looked into Maymead Inc. and learned the Statesville plant is one of 10 in North Carolina and Tennessee. They work with companies like the North Carolina Department of Transportation on resurfacing and construction projects.

The fire marshal said the fire has been ruled accidental and caused about $1.2 million in damages. 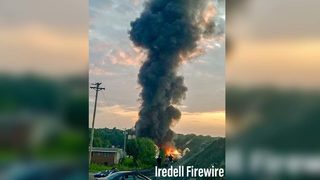