GREENSBORO, N.C. — The woman accused of abducting a 3-year-old girl from a Greensboro playground earlier this week has been arrested more than a day after the child was found safe.

Ahlora Ashanti-Sample Lindiment, who was reportedly abducted from a playground on Phillips Avenue, was found "alive and well" and reunited with her family Thursday night, more than 24 hours after she was reported missing.

An Amber Alert was issued after police said Ahlora was taken just after 6:30 p.m. Wednesday.

"At the end of a very long day, this is a very positive conclusion for us," Scott said. "I've got 30 years of law enforcement. Very seldom do we have this good of an outcome."

Greensboro police said Ahlora was found safe in front of a church and is back home with her family after being taken to the hospital to be checked out.

"The obvious thing we need to do here is find this individual, determine what was the motive, what were the issues, and take our action up to and including any charges that may be relevant," Scott said. "We want to find this individual and get them off the streets."

Police released several surveillance photos of Lancaster on Thursday. By the end of the day, she had been identified as a suspect. 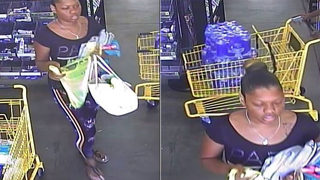 At 8:18 p.m. Thursday, police got a call on a tip line that a small child had been found walking by herself in front of Words of Faith Christian Center, a church on Dillard Street. The woman said she thought it might be Ahlora.

"We, too, believed it was Ahlora," Scott said.

Officers found the girl outside the church and Scott said Ahlora told police her mother's name. She was reunited with her family shortly before 10 p.m., he said.

"Obvious jubilation," Scott said of the reunion. "The parents have been on edge. They were elated they were able to reunite with their child."

An officer trained to talk with victims like Ahlora will see if they can determine what happened in the 30 hours before she was found.

"We had community members here that were helping that worked with our officers," Scott said. "I couldn't be more pleased with the outpouring of support."

A heart-warming video posted to Facebook Thursday night shows Ahlora's stepmom welcoming home the 3-year-old after she was kidnapped earlier in the week.

"Mommy, I want to go home," Ahlora said in the video, which was taken at the hospital.

"I'm just so glad my baby was found," stepmom Shaye Wallace said in the video.

Wallace also thanked the public for helping look for Ahlora and called the authorities "awesome" and "phenomenal."

Scott said that Ahlora had been at a playground Wednesday afternoon. Witnesses saw Lancaster "interact with multiple children in what was defined as a suspicious way," Scott said.

Thursday night, Scott said they would not speculate on a possible motive.

Police released multiple surveillance photos of Lancaster, who was identified as the suspect. They said one of the pictures was taken near the scene of the disappearance, and Lancaster was seen leaving with Ahlora​​​​​.

The other photos were taken of Lancaster leaving a store and carrying shopping bags.

Police said Lancaster has no known connection with the girl's family.

The latest national numbers show 195 Amber Alerts were issued nationwide in 2017. That's up 9% from 179 the year before.

"Every 40 seconds in the nation, a child goes missing. When you drill that down, that's a lot of children going missing in a year's time," Mint Hill Police Chief Tim Ledford said.

Locally in Mint Hill, Ledford said they haven't investigated any abductions or attempted abductions in the past two years. But he has a warning for parents.

"Just because it doesn't happen to you or someone in your neighborhood doesn't mean it's not occurring," Ledford said.