At a Charlotte news conference, McCready said he had spoken with Harris to congratulate him on his victory in the south-central 9th District. The Associated Press has not yet called the race.

>> Channel 9 will sit down with Mark Harris Thursday and we'll bring you that conversation on Eyewitness News at 5.

With all precincts reporting, Harris leads McCready by less than 1,900 votes from 280,000 ballots cast. A Libertarian candidate was a distant third. McCready would have the option to demand a recount if it remained that close after all absentee and provisional votes are counted by the end of next week.

BREAKING: Sources close to both candidates tell me Mark Harris has received a phone call from Dan McCready in the last few minutes. I’m told McCready has conceded the race in NC’s 9th Congressional District and congratulated his opponent. pic.twitter.com/SzY05H98oq

"Mark and I had a spirited race, and although we disagreed on many issues, I never doubted Mark's commitment to our country and his love for our country," McCready said, his wife and their children at his side.

Earlier Wednesday, Harris said Tuesday's results showed a "clear win" for him. Harris lost to Rep. Robert Pittenger in the 2016 GOP primary by 134 votes. Harris beat Pittenger in this year's primary in the 9th, which has been represented by a Republican for over 50 years.

"As someone who has been on the other side of close races, I appreciate Dan's graciousness today," Harris said in a release after McCready's news conference. 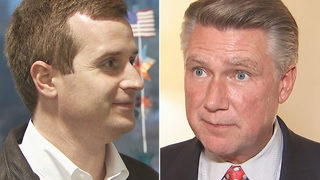 The Manning and McCready campaigns outraised their GOP rivals and allied groups spent large amounts of money on advertising in all three seats.

BREAKING: There will NOT be a concession speech by Dan McCready tonight. Too close to call according to campaign.

Should Harris win, Republicans will continue to hold 10 of the 13 seats in the state's congressional delegation. A panel of federal judges has ruled twice that GOP mapmakers illegally manipulated the lines in 2016 through political data to ensure Republicans retained that 10-3 margin. Republicans disagree, and the map was used this fall while the U.S. Supreme Court decides whether to hear the case.