CHARLOTTE, N.C. — Twenty-four-year-old Luis Ocampo did not get the homecoming he imagined after serving for days along the North Carolina coast as an Army National Guardsman.

While he was away helping those impacted by Hurricane Florence, he said his home back in Charlotte was robbed.

Friends and family started a GoFundMe page for Ocampo and his family with a goal of $5,000.

The person who started the page posted this statement Saturday.

"Your generosity and willingness to help a soldier in need is simply amazing. We are so grateful for these donations beyond belief."

Spc. Ocampo shares the home with his girlfriend, Kailey Finch, and their 1-year-old son.

Finch told Channel 9 Friday that she was shocked when she learned about the break-in.

[RELATED: 13-year-old arrested in connection with 5 armed robberies in Charlotte]

“I don’t know how people can be so terrible," she said.

She and her son were away when the burglars broke in Thursday night.

The family believes the suspects snuck in through a back window and ransacked the place. 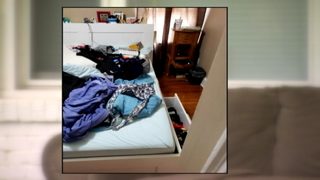 “If I was (to) do that to someone, I feel like I would feel really bad afterwards. I would be like, I see this family struggling and I just messed up their life even worse," said Finch.

According to officials, the thieves took a gun, a large TV, a gaming system, a laptop Ocampo uses for schoolwork and even some specialty coins and jewelry.

“It's irreplaceable. It's not something you can get back," said Finch.

Beyond the valuables, Finch said her heart also breaks for her hardworking guardsman.

"He does a lot for everybody. He always wants to make sure that everybody gets help," she said.

The family told Channel 9 that they are considering an alarm system for their home and have started a GoFundMe to recover from the robbery.

Police do not have any suspects at this point.