CHARLOTTE, N.C. — Police are looking for a woman after her car was reportedly found in the parking lot of a private marina on Lake Wylie Friday morning. 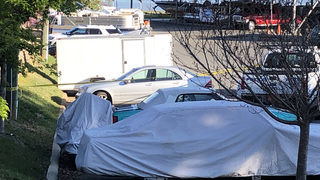 A marina worker told Channel 9 the car had probably been there since last Monday. The worker said they noticed it after reports surfaced Thursday about Watkins, and they called the police just before 9 a.m. Friday.

Police and fire officials brought boats to search the lake about 20 yards from the shore and under the Buster Boyd Bridge.

The Charlotte-Mecklenburg Police Department helicopter was brought in to search from the air and crime scene cadaver dogs to search the ground.

Although CMPD and CFD are searching Lake Wylie this is not a recovery effort yet, officers say Watkins could have gotten in a car with someone else. All possibilities are on the table pic.twitter.com/kh4BKvd1mT

There have been no signs of the missing woman, and police said it would be premature to say what may have happened to her.

Missing persons detectives were at the scene and Channel 9 learned they’ve been in touch with the woman's family to see if anyone knows what may have happened.

Onlookers and boaters said they were concerned as they watched members of Charlotte Fire and CMPD search the area throughout the day.

"So sorry, because this is such a beautiful place. I'm so sorry," onlooker Cathy Metz said.

She was last seen wearing a black, lightweight jacket and blue jeans.

Is a Wegmans coming to south Charlotte? One expert thinks so

The Carolinas Get Real: A Conversation with Black Officers